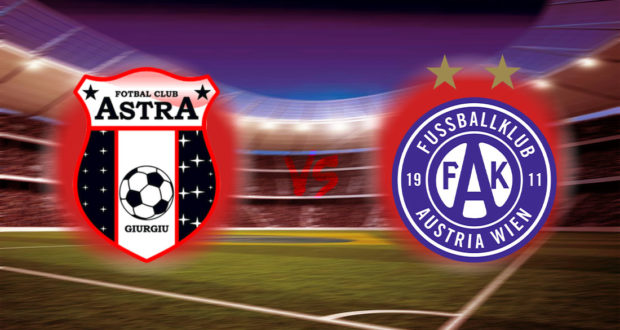 Astra will compete against Austria Vienna in the Group E Europa League 2016/17 competition. Astra had a maiden victory last season when they won the Liga I championship title. The Romanian champions will host their opponents at Stadionul Marin Anastasovici, Giurgiu, on 15th Sep 2016.

Astra has performed moderately in the recent fixtures. With two wins, two draws and two defeats in the last six matches. Astra held off Voluntari to a 1-1. In the Europa League, they drew in the first leg against West Ham 1-1, but later took the lead in the second leg, after a 0-1 victory over the opponents. Thus the team had an aggregate of 2-1. The team beat Poli Timisoara 3-1. Astra had a frustrating defeat in an away match against CFR Cluj, losing 5-1.They also lost to CS.U.Craiova 1-2. The Head Coach for this season is Marius Sumudica, who led the club to their title victory.

Austria Vienna plays in the Austrian Bundesliga. The club finished strongly at position 3, in the Bundesliga. The team has shown great and steady performance in their previous matches. Astra has recorded three wins, one draw and two losses. In an away game against Ried, the team drew 1-1. In the Europa qualifying rounds, the team beat Rosenborg 2-1 in the first leg and 1-2 in the second leg. In the competitive fixture against Altach won against them 3-1. Unfortunately, Austria lost to Sturm Graz 3-1 and Rapid Vienna 1-4. Vienna is one of the most successful clubs in Austrian Bundesliga, with 24 titles in their records. The team has never experienced relegation from the top tier of Austrian football.

On the head to head statistics, this will be the first match between the two sides. Both teams will be looking to win in this fixture, to continue in the qualifying rounds of the Europa. This sports event will be interesting, with lots of good play from the squads.

The possible team line-ups for this match are: